Check out other blog stops by clicking here

Nick Roman – he’s…complicated.  Hotness personified, mysterious, married but let’s not let that stop us.  His marriage is…complicated.  Anyway you put it he’s a whole lot of man.

When Jess sees him for the first time she knows she’s in trouble.  Big  trouble.  Insanely sensual, dark good looks, sexy as sin, deep voice.  What is not to lust over.  And, of course the cocky son of a bitch know what type of effect he as on woman.

Which is why you remember what your mama told you and never get involved with men like that.  Ya know, “connected.”

You just know he’s hiding a boat load of secrets,  you don’t know you don’t wanna know about.  But you love him anyway because underneath all that is that charm, that irresistible charm that draws you in.

But underneath the exterior is a man who will do anything for the right woman.  Lay down his life if he has too.  He will always have your back through thick and thin.  And even though you always feel you want to jump over a cliff when you’re with him, at least you know he will be holding your hand.

This part in Jay-Z and Yonce’s 03 Bonnie & Clyde comes to mind when thinking of Nick Roman. 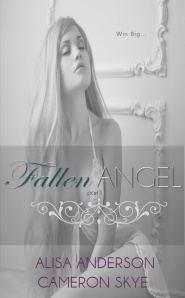 Blurb: When Jess packed up her belongings and fled her small hometown in Kansas, she never looked back. Free from her family’s dark past she was finally able to pursue her lifelong dream as a professional dancer. She never expected to find herself at his door…or at his club.

Nikolas was unlike any other man she had ever met. Sexy…Alluring…Predatory. Dangerous. The kind of man with more secrets than even she had. Every instinct warned Jess against knowing him further, but she always did like playing with fire…

Nikolas Roman took one look at Jess and knew she was trouble from the very start. But something about the defiant twist of her mouth and the wide, haunted eyes of a damaged soul touched him in places he had long ago thought dead. He knew he needed to stay far away from her for his own sanity, but like a moth to a flame he was helpless to resist…

Working at Takers gentleman’s club was the last place Jess thought she would find herself, but she quickly learned how the game was played. See what you want, take what you can get…but at what cost?

Excerpt: Rated 18 and up due to mature nature

He opened the door for her, and she climbed into his Benz. When he shut the door and climbed into the car as well, she knew there was no going back. He smiled at her, his look one of anticipation…and lust.

Journey blared from the radio as they drove quickly down the Jersey Pike. She couldn’t help but laugh at him singing Any Way You Want It. Neither of them spoke and you could cut the building sexual tension with a knife.

They pulled up to what had to be his infamous apartment. She knew he had a house in Elizabeth along with his wife. His wife…..Jess knew when she walked in there with him exactly what she would be doing to her and was shocked she truly didn’t care.

He jumped out of the car, opening the door for her. When she got out he grabbed her hand, leading her up wooden stairs. When they reached the top, he told her to stay on the porch for a moment. He then took out his gun, opened the door and went inside. Within a few minutes he reappeared.

“Had to make sure we were alone?” Jess rolled her eyes as she walked past him. Trying her hardest not to sound jealous.

“Had to get the video ready.” He was sarcastic, and sounded harsh. And bitter.

“I have not slept with my wife in years. She barely let me touch her when I was allowed to.” Nick laughed humorlessly. “Look, can we not do this now? Yes, I’m married. You deserve an explanation, and sometime, I’ll give you one, but not tonight. Is that ok with you?

When she turned from the door the blue sun dress she wore swayed yet clung to her hips. He saw her back was bare almost to her ass. She spoke without turning.

“Consider the subject closed. For now.”

“Sure, wine would be great.”

He disappeared around the corner and she moved to the couch in front of the bay window to look out. Nick returned with two glasses of wine and stopped in his tracks.

Jess’ hair hung over her shoulder in cascading curls. The moon shone through the window and caught her dress making it almost transparent. He was still standing there when she turned, settling onto the couch and crossing one long leg over the other. She spread her arms out on the back of the couch expansively.

He finally made himself walk toward her and handed her the wine as he sat down.

“Not half as stunning as the view from here, kid.”

She turned slightly, angling her knees as close to him as possible. At first glance he appeared to be completely relaxed. He had one arm resting on the back of the couch while the other gripped his wine glass. He sipped his wine and she noticed his free hand was in a fist, his jaw tight. It was like he was holding himself under rigid control.

He leaned forward and placed the wine on the table, reaching over taking hers as well. He placed his hands around her waist, lifting her onto his lap with little effort, moving her legs so she was facing him. Putting both hands in her hair, he pulled her to him and kissed her, claiming her mouth with brute force he couldn’t control. His tongue filled her mouth with an intoxicating taste of wine…and Nick.

Jess pulled her dress up around her waist and pushed against his cock. She paused for a moment at its sheer size. He pulled back from kissing her and looked at her. All the tension was gone from his face and the only expression was one of hunger.

With a strength she’d never felt, he carried her with her long, muscular legs wrapped around him to the bedroom. Without words, he placed her gently on the edge of the bed, pushed her flat and then leaned over to kiss her, gently this time, soothing her punished, bruised lips.

Moving to his knees he flicked his tongue over her clit causing her to cry out. He licked and sucked around her clit, sliding his stiffened tongue in and out, doing everything but what she so desperately needed. Finally he took her in his mouth and slid one finger in, then two, inside of her. When he hummed against her and thrust his thick fingers against the walls of her pussy once more, she exploded in one of the hardest, deepest orgasms of her life.

Look for Fallen Angel, Book Two to be released soon!