Well, I have finally finished my new book and it will be released by the end of May by Yellow Silk Dreams Publishing. Moonbeams of Unintended Consequences Is the story about a young woman who meets a young, black opera star post-symphony at an elegant reception held in one of the symphony benefactors mansions in San Francisco. 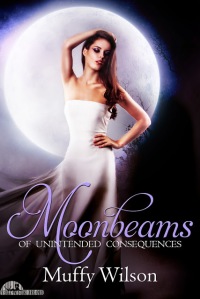 She wore a flowing, form fitted white spaghetti strapped gown that cascaded in tumbled silken folds to her abdomen and revealed her breath in the soft rise of her alabaster breasts. Her eyes reflected an emerald depth with gold flecks that edged to hazel and were framed by neat, arched brows that narrowed to her temples where her heartbeat announced the rhythm of her life.

Her only adornment was a starkly white gardenia nestled in the curves of her auburn. The heavy floral fragrance of the corsage announced her arrival as she glided elegantly to her aisle and settled, like a dove, into her center seat. She was alone…but not for long.

Would she regret her indulgence?

He was a towering, self-assured giant of a black man, chest
broad and arms outstretched in opulent black leather. His intense black eyes locked irresistibly onto her and declared his hunger. The opera house erupted with his full bass-baritone harmony. His musical seduction began, and his hypnotic gaze
was met by her eager response as she answered his desire with a blush.

But, was his desire enough?

They spent an insatiable night together in Room 457 of
the Historic Whitcomb Hotel locked in a magnetic embrace riding moonbeams of passion and ribbons of desire that wove them irretrievably together in ways that only the future would disclose—a future neither of them ever anticipated. Would the secrets of the past, of that one night, prove too much to bear as the future
unfolds the truth and the depths of her desperate need?

Would the life and death struggle she faced overshadow
the seeds of love planted a decade earlier?

The orchestra warmed up in a disconnected, faltering collection of notes, strings and horns as the wealthy patrons filed into the theatre and were settled. She wore a flowing yet form fitted white spaghetti strapped gown with a backline to the small of her back above the well-rounded cheeks of her ass. The cascading neckline tumbled in silken folds to her abdomen which revealed her breath in the soft rise of her alabaster breasts.

She was of medium height with an envious rubenesque shape most men admired: long, shapely legs nipped tightly at the ankle tapering to narrow, small demi-feet elegantly adorned in satin heeled slippers with scarlet, well-pedicured peek-a-boo toes, full breasted bosom with pert erect nipples stretched against the fabric of her gown, round hips that accentuated a narrow waist and a lovely pleasing back that joined all her sumptuous qualities.

Her eyes reflected an emerald depth with gold flecks that edged to hazel and were framed by neat, arched brows that narrowed to her temples where her heartbeat announced the rhythm of her life. Her rounded cheekbones accentuated the graceful curve of her jaw line as it narrowed to a slightly dimpled chin below heart-shaped ruby lips.

Her only adornment was a starkly white gardenia nestled in the curves of her auburn curls that caressed the pale white opaque flesh of her face. The heavy floral fragrance of the corsage announced her arrival. She glided elegantly to her aisle and settled,like a dove, into her center seat. She was alone.

The house lights dimmed yet she glowed, demurely, in the white gown as if she were unmistakably the main attraction.

She stared as he walked onstage:  a towering, self-assured giant of a black man, arms outstretched in black opulent leather to embrace the audience, she felt to embrace her. His piercing gaze locked irresistibly onto her, in all her radiant purity. His intense black eyes seemed to declare his hunger.

The opera house erupted with his  full bass-baritone harmony. He sang, it seemed to Jordan, to no one but her as she smiled quite involuntarily. Each throaty, reverberating note he released
strummed every nerve to her very foundation. His musical seduction began, and would surely end she thought, with her
in his outstretched arms.

Her petulant feminine petals  nestled in the protective mound where her thighs joined. They slowly filled with her eager response and unfolded the protection of the essential pearl of
her existence as she answered his desire with a blush.

She sat through the entire performance tethered to his gaze. The magnetism she could not resist overtook her fully and her responses were involuntary yet welcome. She felt his gaze through her gown caress her, push her, tease her and excite her with every deep vibrato he released into the hall.

She was, therefore, completely surprised when the lights raised and the fluid embrace of his voice was gradually replaced by the swelling bustle of movement from the exiting audience. She looked to her left and right, then up to the stage beautifully shrouded by long red opulent velvet curtains separating her from the object of the gathered passion in her belly.

Her father was a career Colonel and pilot in the
U.S. Air Force which required the family to travel extensively. The family lived in most points between Alaska and France. Muffy spent her formative years in Europe and came of age in France.

Returning from France with her family, Muffy finished high school in Northern California and attended the University  of California,  Davis, and majored in Business Management.

Muffy entered the work force, independent with a fierce work ethic, and retired at 39 from IBM as a Mid-West Regional Director in the Real Estate and Construction Division. She and her husband moved to a small Island in northern Wisconsin where they owned a historic tavern restaurant and resort business which they since have sold.

They now live a charmed life by the water in SW Florida. Muffy pretends to be a serious real estate business person but, in real life, indulges her private interest in writing sexy short stories and sensual literotica ~ Live, Laugh, Love with Passion.

Other Novels and Contributions:

3 thoughts on “Moonbeams of Unintended Consequences by @MuffyWilson”