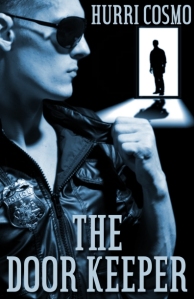 Although they’ve been labeled as a group of misfits, Minneapolis’ 77th police precinct has plenty of talent.  The problem is, it’s paranormal talent and no one’s supposed to know about it.

Nick keeps his officers busy chasing after all the creepy crawly things that tend to go “bump” in the night, thus insuring the twin cities are safe and totally unaware that other realms even exist. Nick is the Door Keeper and his job as the precinct’s captain is to maintain order in what would otherwise be chaos.

When said chaos rears its ugly head in the form of a ferocious and brutal vampire, the last thing Nick needs is to deal with a new partner, even if that new partner is as sexy as Arrain.

Those eyes. Nick could once again feel those eyes. They were watching him. But just where the man was who owned them, he had no idea. Close though. This time the man was so close. Nick shivered. It wasn’t out of fear. No. Far from it. Fuck his life, he was actually thrilled under that gaze. The look was feral, sexual, demanding. Like he was being sized up as some sort of stupid tasty morsel and honestly, something like that should really piss him off. Nick was the alpha in his relationships.

Well, he had been in the past, anyway. Far past.

The hell of it was, he knew instinctively, if he were to ever meet this shadow man, he wouldn’t be. And for some reason, his heart actually beat faster because of it.

Why the hell he was even thinking about sex with a shadow, a complete stranger, was another mystery but his cock was at the ready and his ass muscles flexed in anticipation. When was the last time that had happened? Actually? Never. And he had stroked himself to completion plenty of times, not that he would ever admit to it, just thinking about this dominant stranger and what he might do to him. Like tying him down, entering him from behind. Maybe the guy would be rough, talk dirty, make Nick come countless times.

Nick had them doing it in the bed and in the shower, the hallway and on his desk. Oh yes. He had never had sex on his desk before.

The shadow man had “shown up” at each and every one of these recent particular murder scenes during the 77th’s investigation. Each and every time Nick felt the pure incredible sexiness of the man. It seemed that with each new body that turned up, the shadow felt closer and closer. Nick knew he was the only one who felt the shadow’s presence although Mason had eyed Nick a few times, obviously concerned. Sure, he had thought of the possibility this shadow was actually the killer but he dismissed it. The man would have to actually be here in order to kill like these people were being killed. And the shadow man had to be in a different realm and was for some reason not crossing over completely. So he certainly wasn’t here.

Nick just hoped that the guy wasn’t trying to rip through.

Unfortunately, the 77th had dealt plenty with ominous rips recently. And now Nick was thinking, with as close as his unseen potential lover felt tonight, if there were one more murder, the shadow man would finally materialize. Finally become flesh. Oh! He would become very hot flesh. One more body.

Except murders were definitely not something a cop hoped for…

“Show yourself,” Nick whispered desperately, making sure he wasn’t heard by his comrades. “Please, show yourself.” He felt debased, pathetic even, but that didn’t stop him from needing. There was an almost physical pull toward this being, a necessity to be in his actual presence.

And on his knees.

“You beg so nicely,” came the whispered reply. “I can’t wait to sink into you, to claim you. Be patient, my sweet.” The voice moved air. It tickled Nick’s neck and his hairs shifted as if the man stood right behind him, towering over him, enveloping him in his arms. Another shiver passed through Nick. Oh! How he wanted this man.

Hurri Cosmo lives in Minnesota where she holds tight to the idea that there, where it’s cold a good part of the year, she won’t age as fast. Yep, she avoids the truth as much as she avoids mirrors. But one of the reasons she loves writing is reality doesn’t always offer up a “happily ever after” and being able to take control of that is a powerful lure. Being a happy ending junkie, writing just makes them easier to find. Oh, she doesn’t mind “real life” and she does try to at least keep it in mind when she writes her stories, but she truly loves creating a wonderful couple, knowing they will fall in love and have their HEA. Every – single – time. And, of course, that is exactly the reason she loves reading this genre, too. Give her a glass of red wine, some dark chocolate, and her computer, whether she is reading or writing, and she will entertain herself for hours. The fact she actually gets paid to do it is Snickers bars on the frosting on the cake.

You can find Hurri here:

Other books by Hurri Cosmo:

How West Was Won

Ice Dragon Tales (contains the first two books in the series, The Servant Prince and The Servant King)

Talasar’s Elixir (Book one in the Dragon for Hire series)

Baby, Think it Over

The Astral Mage (Book one of The Captains of the Wolf)

(Upcoming June 26) I Believe Now (Sequel to Until You)

One thought on “The Door Keeper by Hurri Cosmo #MM”