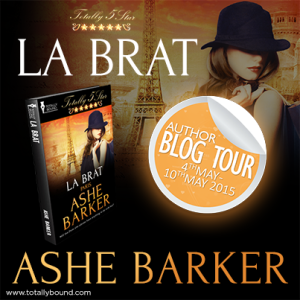 Thou shalt not attack thy Dom

Eugenie has earned her nickname. She is a brat, and in the early stages of their relationship she goads Aaron intentionally. She craves his discipline, though she doesn’t always know what to do with it when she gets her wish. He lays down the rules, she accepts them, then goes out of her way to defy him. Because rules are made to be broken, aren’t they?

None of us likes being told what to do, and most of us are skilled at passive, and not so passive resistance. “I’ll get round to it.” “Later, after I’ve just… “, “Oh, I didn’t realise you meant…” Eugenie knows all the tricks. She’s had plenty of practice.

Eugenie adores Aaron, perhaps more than she realises in the early days. She craves his approval, his affection. And despite her manipulative ways she does respect his rules. She does try to please him, but somehow, in the heat of a particularly intense moment, manages to lose sight of what she wants and needs.

Aaron knows all about the games she plays, it’s one of the qualities he finds most fascinating about his responsive, demanding little sub. But their blossoming relationship comes to a crashing end when she pushes things too far, and her Dom completely misreads her reluctance to accept her punishment? Eugenie breaks the Eleventh Commandment, and Aaron won’t – can’t – tolerate that.

La Brat is the story of a Dom/sub relationship gone wrong. It is a story of misunderstanding, of flawed communication, and of walking away at the wrong time. Eugenie and Aaron both make mistakes, monumental, relationship-wrecking mistakes, though fortunately for them they get an opportunity to revisit their disastrous last encounter and replay the scene.

Most of us are not so lucky. But that’s the beauty of writing stories, you can tell it the way it ought to be.

Thou shalt not attack thy Dom—especially not with his own cane.

She’s committed the cardinal sin, broken the eleventh commandment for submissives. No wonder the Dom she adores wants nothing more to do with her.

Eugenie believes her luck has turned when she lands an interview for her dream job—Events Organizer at Totally Five Star’s flagship hotel in Paris. This is her chance to return to the city, which holds cherished memories for her, and pursue a career she loves. Most of all it’s a golden opportunity to leave behind the bitter taste of her disastrous breakup with Aaron, the one Dom who can make her melt with a look, a word, a lift of his finger.

Her dream crumbles when she comes face to face with her nemesis, now Director of Security at Totally Five Star Paris, the one man who can wreck her dreams with just a few words.

Aaron has never forgotten the lovely little submissive who broke all the rules. He can do without the hassle of such a high-maintenance sub, but his sexy new colleague proves hard to resist. It’s not long before he finds it hard to remember just what his objections were.

Determined not to dwell on the past, Eugenie throws herself into her wonderful new job. If she can only convince Aaron to give her another chance, her life will be perfect. A natural in her new role, against the glamorous backdrop of one of the world’s finest hotel chains, Eugenie is in her element arranging a high-profile celebrity wedding. But when things start to go wrong, Eugenie finds herself at the heart of a series of inexplicable accidents.

Aaron doesn’t believe in coincidences. Is someone else, apart from him, out to hurt his little Genie? And why? He is determined to protect Eugenie—and get to the bottom of who might want to harm her.

In my own writing I draw on settings and anecdotes from my own experience to lend colour, detail and realism to my plots and characters. My stories are often set in the north of England where I live but I draw inspiration from all over. An incident here, a chance remark there, a bizarre event or quirky character, any of these can spark a story idea. But ultimately my tales of love, challenge, resilience and compassion are the conjurings of my own lurid and smutty imagination.

On the rare occasions I’m not writing my time is divided between my role as resident taxi driver for my teenage daughter, and caring for a menagerie of dogs, rabbits, tortoises.  And most recently a very grumpy cockatiel.

I have a pile of story ideas still to work through, and keep thinking of new ones at the most unlikely moments, so you can expect to see a lot more from me.

I love to hear from readers. You can find me on my blog, and I’m on Facebook, and twitter too. And more recently on Tsu

You can get a copy of La Brat from

Eugenie had loved him. She now realized it, though at the time she’d not recognized it. Their relationship had progressed fast from that first delightful encounter at The Basement. After the scene, they sat drinking coffee together for perhaps a couple of hours before Eugenie eventually gave in to the urge to yawn. She wasn’t bored, just bone-weary. The scene had been demanding and she needed to sleep. Aaron drove her home, kissed her forehead as she’d clambered from his car then took her mobile number. He’ said he’d call.

All the next day—a Saturday—Eugenie’s phone was never more than a foot away from her hand. He didn’t call. He hadn’t said when exactly he’d be in touch, but by the time she was undressing for bed, she was in despair. She’d loved their encounter and believed he’d had a nice time too, but in the cool light of day, he’d obviously thought better of continuing their acquaintance. She really should not be so disappointed, but she couldn’t help it. She resigned herself to the reality that she had been just a one-off to him. Nice, probably, but not to be repeated.

The tinkle of a text was unexpected. She nearly missed it. She checked her phone—an unknown number—and tapped the screen.

Lunch tomorrow? Then my place? A

Eugenie hugged the phone to her chest, forcing herself to take a few minutes before replying. It didn’t do to look too eager, desperate even. Then she replied.

Love to. Where and what time?

I’ll pick you up at twelve. No underwear.

Thank you, Sir. I understand.

He picked her up at exactly the time he’d promised and took her to a pub with a beer garden where they enjoyed a leisurely Sunday lunch. Both knew what was to follow, and there was no rush.

Eugenie had considered carefully what to wear and eventually settled on a loose cotton skirt that fell to just below the knee. As she was wearing no panties, she didn’t want any unfortunate wardrobe incidents to occur due to a sudden and inopportune gust of wind. She wondered if Aaron’s no underwear rule extended to her bra as well. She could have texted him back for clarification, but opted for a cautious approach. She was therefore braless too under her tight vest top, and could see his appreciation of that fact in Aaron’s sexy smile.

They left the pub and strolled across the car park in the direction of his vehicle, a sleek, dark gray BMW.

“You still up for this?”

He tilted his head in silent acknowledgement as he opened the car door for her. The journey was not long—just ten minutes or so—before he pulled into the driveway of a large semidetached house. Vaguely surprised, Eugenie had expected him to have a flat, as she did.

Aaron got out and came round to open the door for her. She exited the car and took the hand he offered her. He led her up a couple of stone steps to the front door and let them both in. Eugenie hardly had time to glance around the wide hallway before Aaron turned and pressed her face first against the door. He was not rough, but she knew she was not to move.

“Put your hands on the door and lean forward, arse out.” He sounded different, curt, commanding. She was fast coming to recognize his Dom voice and knew she would obey whenever she heard that tone.

She did as instructed, clenching her buttocks as he lifted her skirt up around her waist.

He didn’t wait for her to agree or to comment. Eugenie had no expectation that he would. In accepting his invitation to come here at all, she handed control to her Dom. She was in Aaron’s hands now and wanted to be nowhere else.

He parted her buttocks and slid his fingers along her exposed pussy lips. She was wet, had been since she’d first caught sight of him through the door entry CCTV at her apartment. He inserted one long finger into her and swirled it around. Eugenie gasped, clenching her inner muscles.

“So wet. You are one dirty little slut. You want me to fuck you?” The snap of foil punctuated his words.

“Sir, please, I do. Yes, yes, oh…” Her words ended on a moan as he drove his cock full-length inside her, his hands on her hips to hold her still. He withdrew and set up a rhythm of short, rapid thrusts that drove Eugenie wild. She squeezed her pussy around him, trying to grip, gyrating her hips in an attempt to intensify the friction.

He slapped her arse cheek, hard. “Keep still. I’ll tell you if I want you to move.”

Gasping, Eugenie managed to comply. Her arousal spiking fast, she knew her orgasm was not far away. Recalling the consequences of coming without permission, she groaned. She had to ask.

Aaron reached around to pinch her clit between his thumb and fingers and she was gone, convulsing in helpless delight as her body shook with the pleasure of what he was doing to her. He lengthened his thrusts, fucking her hard as he chased his own climax. Moments later, the heat of his semen warmed her inner space. He drove his cock deep and held still, his arm wrapped around her waist to prevent her from moving. Eugenie could feel her heart racing. She panted, acutely conscious of Aaron pressed up close to her back.

He slid his cock from her and lifted his hand to tangle it in her hair. He dragged her head back and around so he could meet her eyes. “Good start, ma petite coquine. Upstairs. Now.”

Enter Totally Bound’s La Brat competition for the chance to win your own copy of this title, as well as three more fabulous titles from Ashe Barker’s backlist!