Welcome to the Winter Warm Up Blog Hop!  Thanks for stopping by.  Make sure to stop by other sites on the hop.

So, what are some of your favorite romance reads keeping you warm this winter?  Be they naughty or nice! *wink*

Of course one of my favorite reads has to be one of our own. The Fallen Angel series will definitely fill your stockings with something naughty and nice!

Fallen Angel: A Mafia Romance-Part III will be available on December 23rd.

Make sure to get your copies and always remember:
Family Above Everything.
#FamilyAboveEverything

Here’s what others are saying about the series.

“Fallen Angel is a dark, tasty appetizer with echoes of “The Sopranos.” It’s like picking up a Lindt truffle on your way out of the store. There’s just enough to wake up your taste buds, or in this case, other parts due south.” – Margo’s Red Light District

“Gritty, sexy and with a strong but vulnerable female lead. Fallen Angel is a surprisingly good read.” – Ingrid Hall

“Is Jess going to get sucked into a world with Nick that will destroy her or will she bring Nick to the other side and they find happy ever after? I will be grabbing the next book soon. I need to know more about this story and what the future holds.” – TBird, Crystals Many Reviews

“Fallen Angel is a quick and sexy read. I hope to get the chance to read the next installment. I want to know more about Nick and the dangerous games he’s playing. – Angela, Crystals Many Reviews.” 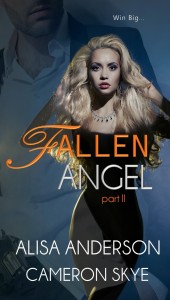 She never expected her life to unfold this way.

Running from a lifetime of pain and torment, Jess’s dream of making it big was becoming less and less of a reality. Falling victim to all the tempting vices always present in the world she lived in now, she was sinking further in the abyss…

Falling deeper and deeper down the rabbit hole. In love with a man as dangerous and complicated as they come. Nick Roman.

Very out of her league.

Impossible for her to stay away from…

Nick knew he needed to let her go. His life was messed up enough as it was without her being in it. But she was necessary to him. He refused to give her up…

An addiction neither of them could kick, no matter what the cost…

Enemies and bitter hostilities continue to build around them, as lovers and spouses hang on with a vice grip, refusing to let go. Their love was all-consuming, risky, life threatening…

Would it destroy everything and everyone around them as well?

***Fallen Angel is a mafia romance serial novel released every 4 to 6 weeks, at approximately 8000 to 11000 words each. Due to sexual content, implied and actual scenes of abuse, violence, organized crime, language and frequent illegal drug use, we recommend this to mature audiences, ages 18 and over, who are comfortable with this subject matter.***

“Sleep with two people. Be your whore.”

“You’re not my whore. Stop saying that shit.”

“Married men don’t leave their wives. I have a man that loves me. You have a wife that loves you.”

“I have a hateful, spiteful, bitch of a wife who I haven’t touched in years. You my darling, have a man who treats you like shit and fucks real whores on the regular. Remember him?”

Jess slapped him. Hard. She went to slap him again, and he grabbed her hand. The last woman who slapped him and lived was his mother.

She truly had no fear of him.

She was nuts. He had to get her under control.

She fought against him, using her fists to hit his chest. “It’s still wrong. Dammit, let me go.”

“No. Not until you calm down.”

“Jesus, Nick. You can’t fuck up my life like this.”

“Meaning?” Jess glared at him accusingly.

“Meaning this.” He moved forward, pressing his lips to hers hungrily. Leisurely, but deliberately sliding his thumbs up her inner thighs. She unzipped his pants, eager and desperate to get to his cock.

When it released from the confines of his pants, she grabbed his hips pulling him closer. Wild with need, guiding his rigid hardness into her folds, she was dripping, wet and ready, as she always was for him.

She wrapped her legs around him, pushing him deeper into her pussy with her legs. This was where he belonged. Inside her. Forever and ever.

Jess tried to stay quiet, but her moans and cries of pleasure grew louder, more intense the harder he thrust. She buried her face into his shoulder to muffle the sounds. He pulled out, so only the very tip of his cock was still inside, before slamming forcefully forward against her.

He didn’t give a fuck if they got caught. All that mattered at the moment was the feeling of her tight pussy against his dick. He thrust, sliding against her harder and harder, until he was sure he bruised her.

Jess kissed his lips as he felt her tighten around him, vaginal walls slick with moisture as she reached her climax, her screams and shouts of pleasure swallowed into his mouth.

Nick followed after her, thrusting with a hoarse shout against her lips, releasing, hot, velvety semen inside of her. Not caring about anything else at that point but her sweet pussy, taking everything he had to give.

He could die coming inside of her, he knew.

Probably would, given his luck.

Nick returned to earth, and somewhere in the background, heard a knock at the door. At first, he thought it was a figment of his imagination.

Then he heard Connie’s voice. “Nickolas? Are you in there?”

For the next several minutes they stood, motionless with their bodies locked together. Neither one of them wanting to come back to reality and deal with any of this.

Another knock this time louder.

Jess’s heart started racing. She had to get out of there but how?

Climb out the fucking window?

She anxiously pushed him out of her, sliding off the desk, yanking her dress down. She was absolutely horrified. Torn between sinking through the floor, and kicking Nick’s ass.

“Why do I let you get me into this shit?”

He pulled up his pants, walking over to the wall separating his office from the club. He moved the painting, hitting a switch. A door opened that led her into Mike’s DJ booth.

“Get out this way. I’ll deal with this.”

She looked at him in shock. What the hell? An escape door?

The man was full of surprises.

“Kid, will you go the fuck on? I’ll take care of Connie.”

“Fine. I’m going. But mark my words. This shit? Will not be happening again.”

She started through the door and found Mike, leaning down to help her through. She wondered if this is how Alice felt going down the rabbit hole.

She turned, looking at him one more time.

She paused, noticing the doorknob turning and opening, but still not moving.

Mike yanked her though, closing the door so she wasn’t seen.

well…alisa did stuff and is still doing stuff. only now she has two boys crazy enuff to want her as their mommy. hey, at least she tried to warn them, so her job is done. she doesn’t like to capitalize, partially because she likes how lower case letters look visually, but mostly out of laziness. please don’t judge. it could be you. and she would say, hey. you’re alright, buddy. you’re ok in my book. now c’mere for a hug. the hug might be pushing it. air kiss? you are strangers, after all, with only a mutual love of poor grammar.

​she lives for a world full of controllable anatomically correct, android men programmed to meet her specific feminine needs (wink, wink, nudge, nudge with a big waggle of the eyebrows). who look like the rock. and ian somerhalder. and idris elba. and that’s it she promises. variety. gotta have variety, right?

​but alas…apparently that exists only in johanna lindsey’s genius mind. so until then, she enjoys her incredibly warped sense of humor. she reads tons of erotica and romantic, drippy goo that makes her heart go pitter patter. then she thought, hey. what, she said to herself. (softly, of course, so no one finds out she is indeed, 2 nuts short of a fruitcake) maybe you should write this stuff too. maybe someone will like it and maybe buy it. so she said, huh, you think? then she said, well…yeah, i wouldn’t have suggested it…(inserts sarcastic tone) and then she was like lose the attitude, ok? then she was all, would you just shut up and write, already? sheesh! and she did. 🙂

When Cameron is not in the lab working toward a Ph.D., in Neuropsychopharmacology, which in laymen’s terms is basically finding the effects drugs have on mood and behavior, she is writing stories, crating vivid, intense characters you will never forget.

She believes while life can take you down every path but the right one, eventually everyone will find their happily ever after.

Make sure to leave a comment for your chance to win (1) copy of Fallen Angel, Part 3