in celebration of the fright night hop, i thought i would spend a little time talking about the master himself, stephen king. i grew up reading him and to me, he remains at the top of any list of truly scary, well written books that quite frankly still scare the shit outta me.

whether its the apocalyptic book, the stand with the deliciously evil randall flagg, or the hero’s journey with a twist aka the talisman, he managed to live out everyone of my horrific fantasies, some i didn’t even know i had. and who could forget the absolute mind fuck of gerald’s game? *shudders* i STILL have nightmares about that shit.

so without further adieu, here is my list my top 5 favorite, scariest, stephen king books:

so what are your all time stephen king favs? let me know!  One commenter will win a $5.00 gift card to Amazon.

Now a sweet treat from me =)

Three friends, who struggled for fortune and fame, have finally found themselves thrust into mega-stardom.

What is right if there is no wrong…

For Ty, Lena and Danny, they’re about to find out as they cross the boundaries from all things safe to an arena testing love, friendship and loyalty. An arena that’s forbidden, taboo…and oh so tempting.

They’re riding hard and fast in a world where sex, money, love and rock & roll are all a game of give & receive, where any wish can be granted if you just ask…

Open, honest and raw, this is a rare glimpse of what happens behind the fortune and the fame, beyond the limelight, past the adulation and acclaim.

“What did you like most?” Ty’s voice was raspy, heated.

He couldn’t believe he was still coherent at this point.

All he could think of was burying his face between her thighs. Savoring and tasting the sweet nectar of her pussy. He wanted to lap up every bit of her scorching wetness he felt through the fabric of his pants.

He wasn’t sure how much longer he could play this game.

Thank god she designed the place with all of this in mind. Naturally dark, with a fantasy element, appealing to those who wanted to…indulge a little further, yet still maintain their privacy. Simply put, you didn’t see anyone unless they wanted to be seen.

He would bet money she never expected to be the main attraction.

“I love the way it made me feel. In control. Powerful. It was like…” She was breathless now, trailing off.

Becoming lost in Danny’s eyes again. They drilled into her soul with a fiery intensity. Intimidating and terrifying.

Feeling Ty beneath her while Danny watched, was driving her crazy insane.

Ty pressed her hips down on top of him. Sliding his hips in a rocking motion.

“It was like…riding a dick. Setting the pace. Controlling the flow. Oh god…Did I say that out loud? Ty…what in hell are you doing to me?”

Ty slid his hands under her ass. Unzipping his jeans far enough so that beautiful, thick cock sprang free. He hitched up her skirt from the back so she wasn’t exposed in the front. Pulling her back down. Almost all in one movement.

They were flesh to flesh. Skin to skin.

Nothing separating them but free will.

He was but mere inches from being fully sheathed inside of her.

“What am I doing?” Ty murmured, repeating her question.

His mouth brushed her bare back. Shoving aside the strap of the skimpy top she wore. His lips blazed a path down her spine. Pausing, licking the salty taste of her skin to his mouth.

“I’m making it good for you, sweetheart.”

Other Books by Alisa Anderson

well…alisa did stuff and is still doing stuff. only now she has two boys crazy enuff to want her as their mommy. hey, at least she tried to warn them, so her job is done. she doesn’t like to capitalize, partially because she likes how lower case letters look visually, but mostly out of laziness. please don’t judge. it could be you. and she would say, hey. you’re alright, buddy. you’re ok in my book. now c’mere for a hug. the hug might be pushing it. air kiss? you are strangers, after all, with only a mutual love of poor grammar.

​she lives for a world full of controllable anatomically correct, android men programmed to meet her specific feminine needs (wink, wink, nudge, nudge with a big waggle of the eyebrows). who look like the rock. and ian somerhalder. and idris elba. and that’s it she promises. variety. gotta have variety, right?

​but alas…apparently that exists only in johanna lindsey’s genius mind. so until then, she enjoys her incredibly warped sense of humor. she reads tons of erotica and romantic, drippy goo that makes her heart go pitter patter. then she thought, hey. what, she said to herself. (softly, of course, so no one finds out she is indeed, 2 nuts short of a fruitcake) maybe you should write this stuff too. maybe someone will like it and maybe buy it. so she said, huh, you think? then she said, well…yeah, i wouldn’t have suggested it…(inserts sarcastic tone) and then she was like lose the attitude, ok? then she was all, would you just shut up and write, already? sheesh! and she did. 🙂

Does your mother know what you’re reading?

Check out other blogs on the hop 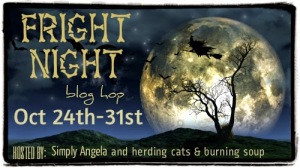