What is right if you decide there is no wrong…

​For Ty, Lena and Danny, they’re about to find out as they cross the boundaries from all things safe to an arena that will test love, friendship and loyalty. An arena that’s forbidden, taboo…but oh so tempting. In their world sex, money and excess are all a game of give & receive, where any wish can be granted if you just ask…
Excerpt from Give and Keep

Danny reached for the remote control on the nightstand, turning on the mp3 player. He pressed play. The rich sounds of Kelis and Guru filled the room, as “Supa Love” began playing. The sexual lyrics reverberated throughout the room, and Danny started mouthing the words suggestively into her mouth, kissing her.

Lena began to move her breasts over his chest, allowing her nipples to get wet with his semen. She swayed to the hypnotic beat and he lifted his hips off the bed. Wrapping his arms around her waist tightly, licking his sperm off her breasts. Then biting down on her nipple. She picked up where he left off, whispering the words mockingly back to him in a sexy pant, her hips grinding on him to the beat.

Danny leaned back into the pillows, taking her down with him, looking into her eyes the whole time, never breaking contact.

The track continued, but both of them had gone too far to play the game any longer. Something had shifted between them. The mood was no longer playful.

The music flowed over them. Lena knelt down, crushing her breasts to his chest. Her lips met his again, and she astoundingly managed to continue moving rhythmically.

She rode him, faster and faster, slamming down on him. Danny felt himself tense for another orgasm. He sat up, crossing his legs under Lena. Wrapping her legs around his waist. She slid her arms around his neck, holding on to him tightly. Her mouth locked on his, biting him. Licking him. Sucking him.

She was beyond anything of this world. The sensation of being so connected to him this particular way, so intimately, felt…strange. But in a good way.

She wondered if she should be scared of what she was feeling.

But refused to think about that now.

“Oh…My…God…Danny…I can’t wait…Shit…” Lena whimpered softly as he held her. Whispering to her in her ear.

“It’s alright baby. Let it go.” He continued speaking, smoothing her hair back from her face. Calming her. “I’ve got you.”

Danny felt his eyes get moist and closed them so she wouldn’t see.

He kissed her on her earlobe. “I’ve always got you.”

And then, she burst into flames, crying out his name over and over. Bending down to sink her teeth into his shoulder. Danny followed. Erupting, spilling into her swollen, tight pussy, saying her name once hoarsely, before totally losing himself in her.

Lena felt her eyes fill, and realized she was crying.

What the fuck had just happened?

She wanted to hide, she was so raw and exposed. Danny kept a tight grip on her.

Like he knew her first instinct was to run.

They remained joined together in the sexual embrace, as the track faded out.

Then she was silent again.

He knew she was terrified of what just happened. He didn’t want to push her any further. She wasn’t the type you pressured. One wrong move, he knew he would lose her.

Danny wasn’t about to let her go.

“Deal.” She couldn’t help but feel a little relieved.

He had let her off easy.

Next time she knew she wouldn’t be so lucky.

“I figure there’ll be plenty of time to talk later. Right now I think there’s something else we need to discuss.”

“Really?” she finally lifted her head to stare at him. “Like what?”

He turned and stared at Tyler, standing in the doorway.

He had known he was there all along.

“Ty,” Danny said, giving him a smile that didn’t quite reach his eyes. 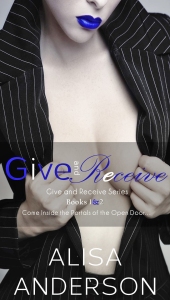 “I should go, Ty…before anything else happens we regret.”

She cleared her throat.

“Not that anything happened before. Because it didn’t. But if it did…which it didn’t…let’s not do something we’ll both regret tomorrow.”

“I understand you feel that way. I can even empathize with your plight. But I suppose that’s the difference between you and me.” His head dropped as he bent forward. “I don’t regret this.”

He glanced up, catching her gaze and holding it as he took her in his mouth, sucking on her swollen clit with bruising intensity.

She whimpered and her body took control, shoving herself into his face, using her hands to push him down further, tangling her hands in his soft hair as she pulled it hard, smothering him as she pressed herself against his mouth, until finally he couldn’t breathe, but fucking her with his mouth anyway. She ground into him with brutal force as Ty groaned against her and continued to lick and twirl his tongue around her swollen clit, finally drawing the fleshy lips of her labia into his mouth as well.

He bit down on her flesh as he slid his fingers inside her, sliding two fingers, then three. “Release it, baby. Let me taste that cream. Jesus Fucking Christ…you feel so good in my mouth, Lena…give it all to me.” He sucked her back into his mouth, squeezing her ass, cramming her against his lips and into his mouth, like he couldn’t get enough of her, until she finally cried out, her forceful orgasm hitting fast, and sharp.

Ty continued to lap her up, swallowing every last bit of precious nectar. The more he licked, the more she felt herself heat once more, and before she knew what was happening she came again, straight into his waiting, open mouth.

“Enough of what?” Ty delved into her wetness once more, placing soft kisses on her mound of damp curls.

Lena moaned, low and urgent, resisting the urge to move her hips over his to finally    ride him hard and deep, like she wanted to do all night long.

“Enough…of this. Stop it. I don’t want you to touch me.” Lena’s voice caught and became ragged as she inhaled a deep breath, steadying herself.

She couldn’t believe she let him do this to her.

For the first time, she meant.

Make sure to stop by other stops along the hop for other great giveaways!

Also, make sure to enter the Grand Prize Giveaway. Readers only need to fill out the Rafflecopter box and press enter! (One entry per person!)

4 thoughts on “Fall into Romance Blog Hop: Sneak Peek of Give and Keep by Alisa Anderson”