If you were given a chance to travel back in time, what year or place would you go and why?

Um, no. Not a chance. I have this terrible fear of going back in time and there is no toilet paper. Or ice. I can’t even imagine the horror of no ice…

Describe your novel in seven words or less?

LOL. Seriously? Like, a million people: John Watson from the BBC series Sherlock. And Harold Finch from Person of Interest. And Superman. And possibly a number of characters from a really geeky sci fi show that shall remain nameless.

If you were a tree (or animal) what kind of tree (animal) would you be?

A bird. I’m really, terribly afraid of heights, but I’m also fascinated with birds. I’d most want to be a swallow. Their aerial acrobatics are incredible. Or possibly an owl. Owls are badass. The great horned owl will actually hunt and kill a skunk. A skunk! (Probably because its sense of smell is extremely limited, but whatever. Owls are cool.)

Where were you born and where is home for you now?

I was born in the heart of Pennsylvania coal country, on the top of a strip mine. Well, on the mountain near the strip mine. Everything in winter looked exceedingly dingy. These days I still live in Pennsylvania, but in the Lehigh Valley. It’s summer, so it looks like I live in a salad bowl.

What is the last book you read?

What’s in your refrigerator right now?

A crapton of stuff I won’t eat because both of my sons and my husband consume more calories than I ever thought remotely possible back when the boys were babies.

If you were deserted on an island, who are 3 famous people you would want with you?

Missionary or on Top?

Yes. And upside down. And in a car. On a train. I really, really wish I could fly like a bird, because… yeah. Just imagine that!

Erica Jong says she loves the word cunt and wishes she could “rehabilitate” the word and make it beautiful again. Do you feel the same way about some of the words you use in your stories?

Yes, except basically I have hated words instead of loves. I will never use these words or phrases in my books (unless I am being held at gunpoint and forced to type): stick of love, moist tunnel of rapture, balls like eggs, scratch the snatch, salami, bugger the bug, stank slit, pound the duck…

I mean, really? Pound the duck? Who thought of that? They should be forced to read tax law for a whole day as punishment.

Is there any additional info you would like to share with your readers about what’s next for you and your books?

Right now, I’m writing another Stronghold book, the sequel to DARK. It will feature Greyson brother, Solomon, and Lucy, Eva’s best friend. After that, I may work on another Planet Alpha series book. Or something totally different. My muse is a fickle creature.

Where can readers stalk…um…I mean, find you? 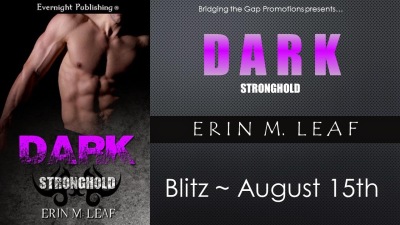 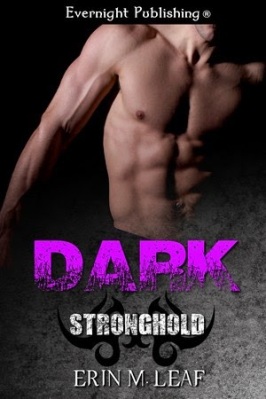 Greyson Dark doesn’t like strangers in his territory.
Eva Waverley doesn’t like being told to keep out.
After her father’s suicide, hiking is the only thing that makes the bullying in Eva’s new school bearable.
When Greyson rescues her from a tumble, she falls for him despite his autocratic demeanor. She’s leaving for college soon—what does it
matter if she crushes on a man everyone else fears?
Greyson suspects Eva is his true mate, but duty demands he remain aloof. She doesn’t know he’s a long-lived Sentry, sworn to protect Earth from an ancient alien menace. When she leaves for college, he’s relieved, but four years later she comes back, all grown up and more gorgeous than ever.
Greyson can’t afford to care for a mortal woman, no matter how compelling. Hackers are attacking Stronghold, the Sentries’ net, and Spiders are swarming beyond the moon, but when Eva is attacked, he discovers he can’t just let her die…
Buy Links: Evernight – Amazon – BookStrand – ARe – Smashwords

She refused to take his comfort. “I’ll do it,” she said, turning her face away from his hand. Anger rushed through her. Damn John. And damn Greyson, for being a Sentry.

“I already told my brothers no.” He pulled her close.

Eva didn’t have the strength to fight him off again. Her lips hit his damp shirt and she let her head fall into his shoulder. He tasted like rain and dust.

“I would never use you as bait,” he murmured.

She bit her lip, hard. If she let herself think about it too much, she’d lose it. “You have to. It’s the only way.” At least he believed she was innocent. Small favors, she told herself grimly.

“I’ll find another way,” he murmured, kissing her hair.

He was being so gentle. The strangeness of it undermined her best intentions. Dammit. I can’t do this alone anymore. Eva blinked back tears, and hurriedly wiped them away. Screw it. I’ll do what I have to, but I want to live a little first. She grabbed onto him, twining her fingers in his shirt. “I don’t want to die, Greyson.”

The next thing she knew, he’d lifted her up in his arms. “Greyson, stop,” she cried, hanging on for dear life.

“Shh,” he admonished her, heading for the stairs.

She shoved her face in his chest. “I don’t know how to do this.”

“I do,” he said, kicking open the door to his room with his foot. The bed was lit with red and gold light as the sun set over the valley.

Eva trembled as he lowered her down. “I thought you couldn’t get close to anyone. You said you had to remain aloof, as a Sentry.”

He growled as he took off his shirt, tossing the wet fabric to the floor. “I changed my mind.”

She stared at his chest. Muscles played over his torso as he popped the buttons on his jeans. She knew he was strong. He’d picked her up like she weighed nothing at all, but she hadn’t realized until right now just how much his clothing hid. He unlatched the metal clasps of his boots and kicked them off, padding barefoot to the bed. Her eyes went to a rip in his jeans as her whole body went hot. Whoa, she thought, overwhelmed. Is this really happening? She’d been dreaming about this moment for years and had all but given up on being with Greyson intimately.

“Don’t be afraid,” he said, tugging at the arms she’d self-consciously wrapped around her chest.

“I’m sorry,” she said, voice cracking. “I’m not perfect and thin and strong—”

She frowned at him, but he picked up her hands and put them on his shoulders. His skin is so hot. She kneaded the warm muscles beneath her palms, trying to convince herself she wasn’t dreaming.

When he closed his eyes and shuddered, she bit her lip. “I’m sorry,” she said again, unable to help herself, but then he moved in and kissed her. The shock of his lips moving against hers destroyed her ability to think. All she could do was hang on and trust him.

Greyson released the control he held over his empathic power and let himself sink into her emotions. He didn’t understand why she thought she was so unattractive—Eva was one of the most beautiful women he’d ever known, not just in body, but in strength of character. She’d been through so much and come out the other side a survivor. She eroded his self-control until he couldn’t fight himself any more. He hadn’t let a woman get close to him in two hundred years, but this slip of a girl destroyed all his good intentions. He nibbled on her delectable lower lip. “You’re beautiful,” he murmured, hands on her hips. No way was he going to stop now. He’d committed to this, Bruno and his suspicions be damned.

She gasped, opening to him perfectly. He kissed her again, savoring her taste. Her hands clutched at his arms and he kissed down her jaw, reveling in the softness of her skin. “You’re strong,” he said, unbuttoning her blouse and pushing it over her shoulders. His breath caught when he saw his ring nestled between her breasts.

“I’m not,” she argued, but he kissed her a third time, cutting off her protests.

“Gorgeous,” he whispered when he let her up for air. He peeled the fabric from her body. Her generous breasts strained against the black satin of her bra and he wasted no time in nuzzling against them. She slid her hands into his hair as he tugged at the cup, popping a nipple out over the top. He sucked it in, playing at it with his tongue until it pebbled.

He grinned against her skin and undid the clasps, sliding the bra away. He licked at her other nipple, plying the first one with his thumb. His senses were wide open and he could feel just how much she liked this. When he bit down, she arched her back. The tiny bit of pain shot her arousal higher. Greyson groaned as the echo of it funneled through him. His dick hurt where it was trapped in his jeans. He bit down again, then undid her pants. He paused and looked up her body. Her fair skin flushed under his gaze.

“There’s no going back from this,” he said, wanting her to be certain. He reached up and snagged a lock of her gorgeous hair between his fingers. “Be sure.”

2 thoughts on “Author Interview with Erin M. Leaf @erinmleaf and Spotlight on Dark”