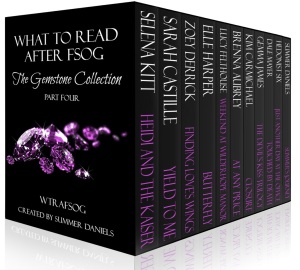 Heidi and the Kaiser by Selena Kitt

Mousy little Heidi is a wanna-be designer who works as nothing more than a glorified go-fer for one of the largest and most well-known companies in the world of fashion. When she accidentally stains CEO Warren Kaiser’s pants, she gets two things she didn’t expect–a spanking…and a job. Kaiser hires her as his assistant, and her “training” proves to be quite a test of surrender.

Yield To Me by Sarah Castille

Amateur MMA fighter, Marcy Foster is determined to win the state championship. But dark secrets and a broken trust mean there’s one submission she just can’t master. Fortunately Club Excelsior has hired a coach who knows all the right moves.

Sexy, confident and commanding, fight consultant Jax demands control, both in and out of the ring. But once he has Marcy against the ropes, Jax knows he’s in too deep. He has the dominance to give her what she needs, but once he unleashes her hidden passions, there’s no going back.

Under Jax’s skilled hands, Marcy submits to her deepest desires. But when her personal and professional worlds collide, she is forced to face a brutal truth — yielding to her darkest needs may be the one thing that costs her the fight…and her heart.

CAMERON ENDERS seems to have it all: a brand new condo in a city she loves, a top executive position at an international entertainment firm, an insane amount of money, and a gorgeous boyfriend. But when Cami catches the boyfriend in the act with another woman, it triggers all the anguish from years of neglect by her parents, and she realizes she never learned how to love or be loved. Cami flees to the remote tropical island of Tarah, but she can’t avoid facing her problems any longer when she meets the man of her fantasies…

Best Selling Author Zoey Derrick comes from Glendale, Arizona. She was once a mortgage underwriter by day and is now a paranormal, romance and erotica novelist full-time. She writes stories as hot as the desert sun itself. It is this passion that drips off of her work, bringing excitement to anyone who enjoys a good and sensual love story.

The intimacy of her fantasies that she shares with her readers is thrilling and encouraging, climactic yet full of suspense. She is a loving mistress, up for anything, of which any reader is doomed to return to again and again.

Grace Elliot is falling apart. Overwhelming tragedy has turned her world into a dark and lonely place. She’s alive…but not living.

Counsellor Ben Hardy is certain he can help Grace heal. Maybe it’s a way to rid himself of the demons haunting him from that one horrific night when his life shattered. When they meet, everything changes, and their pasts offer them a remedy to save each other.

Sibel Hodge is an International Bestselling and Award Winning Author. She has 8 cats and 1 husband. In her spare time, she’s Wonder Woman! When she’s not out saving the world from dastardly demons she writes an eclectic mix of genres.

Her work has been shortlisted for the Harry Bowling Prize 2008, Highly Commended by the Yeovil Literary Prize 2009, Runner Up in the Chapter One Promotions Novel Comp 2009, nominated Best Novel with Romantic Elements in 2010 by The Romance Reviews, Runner Up in the Best Indie Books of 2012 by Indie Book Bargains, Winner of Best Children’s Book by eFestival of Words 2013, and Winner of Crime, Thrillers & Mystery | Book from a series in the SpaSpa Book Awards 2014. Her novella Trafficked: The Diary of a Sex Slave has been listed as one of the Top 40 Books About Human Rights by Accredited Online Colleges.

When Stephanie and Jenny go to a Murder Mystery Halloween weekend at Wilderhope Manor, they’re expecting fun and games. But following creaky floorboards, spooky noises and an alarming encounter in the Manor’s grounds, the girls begin to wonder if there’s more to Wilderhope Manor than meets the eye. As they find frequent comfort in one another’s arms – and their bed – will the girls discover what’s causing the bumps in the night, or will they run scared?

At Any Price by Brenna Aubrey

When Mia Strong, proud geek-girl and popular gaming blogger, auctions off her virginity online, she knows she’ll make waves. But what she will not be making is a love connection. Her rules are set in stone: One night. No further contact. It’s a desperate step, but it’s the only way she can go to medical school and pay her mother’s mounting hospital bills.

Adam Drake, the enigmatic auction winner, is a software prodigy who made his first million at seventeen. Now, in his mid-twenties, he’s sexy, driven and–as CEO of his own gaming company–he’s used to making the rules. Before Mia knows what’s happening, he’s found the loophole in the rules of her auction. Every stipulation she’s made to protect her heart gets tossed by the wayside.

There’s always the one…He’s one person throughout life you think about every so often, the one who leaves his unique indelible mark on you, the person with whom you need closure. For Margaret Collins that person was Mike Taylor. After he broke her heart seventeen years ago, she left everything she knew and reinvented herself. With a new home, a new look and a new name, Riley Williams is now an up and coming journalist given the assignment to interview a Mike Taylor. She never suspected he would be her Mike Taylor. With Mike having no hint of Riley’s true identity, she must decide if she will make him pay for sins he doesn’t remember committing, or if she can wipe away the past and be with the one man who she has always wanted?

Kim Carmichael began writing eight years ago when her love of happy endings inspired her to create her own.  A Southern California native, Kim’s contemporary romance combines Hollywood magic with pop culture to create quirky characters set against some of most unique and colorful settings in the world. With a weakness for designer purses, bad boys and techno geeks, Kim married her own computer whiz after he proved he could keep her all her gadgets running and finally admitted handbags were an investment. Kim is a member of the Romance Writers of America, as well as some small specialty chapters.  A multi-published author, Kim’s books can be found on Amazon as well as Barnes & Nobel.  From alcohol to makeup to infrared cameras and even scientific lasers studying the atmosphere, Kim has worked in some aspect of sales and marketing for over twenty years.

Kayla Sutton faces a question no mother wants to face: what would you do to save your daughter? Broke and desperate, she siphons thousands from the company she works for to pay for her daughter’s life-saving treatment, but when Gage Channing discovers her theft, she learns her boss has no intention of turning her over to the police. Instead, he issues an ultimatum—submit to him, or go to jail. As her daughter’s life hangs in the balance, Kayla must dig deep to find the strength to travel down the path of pain and pleasure. But when her past catches up to her, prompting a free fall into forbidden territory with a man she once loved, she knows her only recourse is to come clean and beg her Master’s forgiveness. INCLUDES: Ultimatum, Enslaved, Retribution.

Gemma James (a pseudonym for Christina Jean Michaels) loves to explore the darker side of sex in her fiction. She’s morbidly curious about anything dark and edgy and enjoys exploring the deviant side of human nature. Her stories have been described as being “not for the faint of heart.” She lives with her husband and their four children–three rambunctious UFC/wrestling-loving boys and one girl who steals everyone’s attention.

Touched By Death by Dale Mayer

Anthropologist Jade Hansen returns to Haiti to face the demons of her past and finds herself back in the path of danger…and falling in love with a man who’s in the middle of it all.

Dale Mayer is a prolific multi-published writer. She’s best known for her Psychic Vision Series. Besides her romantic suspense/thrillers, Dale also writes paranormal romance and crossover young adult books in different genres. To find out more about Dale and her books, visit her at http://www.dalemayer.com. Or connect with her online with Twitter at www.twitter.com/dalemayer and on Facebook at www.facebook.com/dalemayer.author

Just Another Day At The Office by Hedonist Six

It’s Cath’s first day at the new job, and she’s feeling overwhelmed. Her colleague, John, is able to set her pulse racing just with his presence, while their sleazy boss, Richard, seems unable to grasp that she’s not into him.

John is used to being ignored, or worse, by the opposite sex. When new girl, Cath, tries to get his attention, he reacts in the only way he knows how: with suspicion. Can she convince him he truly is the man of her dreams?

Hedonist Six (or simply “H.”) is a Romance writer based in rainy England. Addicted to caffeine, chocolate and impure thoughts, she likes to write short stories and serial novels dealing with those aspects of the human condition that we all think about, yet dare not discuss openly. No-one is perfect, neither are her characters, which makes them all the more relatable and well-liked by her fans.

Join Summer on her journey of sexual self-discovery; a well written, intelligent and sexy series about the beginning of her sensual, sultry love affair with life, and all the joys of being a woman.

Summer Daniels is the webmistress of WTRAFSOG, a unbelievably active reader recommendation / author promotion community. She also has penned the first few volumes of a True Romance / Erotica series called Summer’s Journey which tracks her sexual awakening after a long, boring marriage.