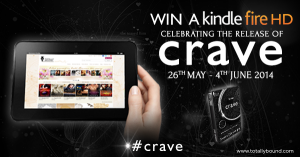 To celebrate the release of Crave Totally Bound are giving you the chance to win a kindle fire HD!

Enter here for your chance to win: https://www.totallybound.com/competition/crave-kindle?utm_source=houseofalisa&utm_medium=blogtour&utm_campaign=crave

She still craved him… The sight of a collar in her boyfriend’s drawer had stunned Sarah. Panicking, she had fled. But no other man has ever been his equal.

Two years ago, the woman he’d hoped to collar and marry disappeared. So Reece McRae is stunned to find his former girlfriend on her knees, behaving as the submissive he’d always wanted.

Is it too late? He should refuse her, but an undeniable sexual attraction consumes him.

Sarah had been under Reece’s spell from the moment she met him. When she found a steel collar in his drawer, she panicked. The idea of a lifetime of his relentless demands, sensual and otherwise, suffocated her.

In the years they’ve been apart, she hasn’t met his equal. Now, convinced one last night will vanquish his memory, she sets out to seduce him.

The Reece she returns to is even more determined to have his way. Is she now strong enough, brave enough, to surrender to his love?

Reece watched several emotions chase across her face. Her lips had parted as she’d listened to him. Now, slowly, she closed her mouth. Then she frowned. He saw shock. Disbelief. Resignation. And now, with the set of her lips, determination.

Reece told himself that her answer didn’t matter. She’d vanished once, and he’d survived it. When he’d accepted the invitation to Julien’s party, Reece had expected to find some female companionship for the weekend. Playing with her could be an interesting diversion, as long as he didn’t allow himself to fall under her spell again.

“I’m sure that you’re right that I should be scared. But maybe I’m more foolish than frightened. For right now, I’ll settle for what you’re offering.”

He reached for the bottle of wine and topped off her glass. “Eat up. Your dinner is getting cold.”

She picked up her fork, and he did the same.

“This really is good,” she said.

He took a bite. “Agreed.” He wasn’t talking about the food.

In silence, they ate for a few minutes.

“I like it best with the blue cheese butter,” she said.

“I prefer it with a squeeze of lemon.”

She took one more bite then pushed her plate aside. The waiter appeared a few minutes later.

“Bill it to my room, please,” he told the waiter.

As soon as they were alone, he stood and pulled back her chair.

Taking her hand, he said, “Come with me.”

He led her down a path toward the ocean.

In the dimness, he saw her eyebrows draw together.

The resort had done an artful job with using shrubbery to make the path clear. There was enough lighting to be safe, but not enough to ruin the Caribbean ambiance.

Only one other couple was on the private beach, and he guided her away from them.

The resort loomed in the distance, providing a point of reference. Clouds drifted in front of the moon, casting shadows before moving on.

He led her close to the ocean, where the sand was damp, packed, easier to walk on.

“Now what?” she asked when he pulled her to a stop.

“I beg your pardon?”

She glanced around. Then she worried her lower lip. “You’re serious?”

“If I help you undress, there will be a penalty.”

He remembered her teasing him like that in the past. Sometimes she’d opt to pay the price. Other times, she just wanted to know what her options were. When he spoke more harshly, she obeyed, even if it was slowly, reluctantly. “Do you like that dress?”

She kicked off her sandals. Then she pulled her dress over her head.

Like the sound of Crave? You can buy it here: https://www.totallybound.com/crave?utm_source=houseofalisa&utm_medium=blogtour&utm_campaign=crave