There’s another reason why relationships are also called ties. We are bound to do things for those we’re close to that we wouldn’t consider doing for a stranger. I’m not talking donating a kidney here. I’m talking really weird things. For instance, my mother is teaching me how to steal.

Shocked? Yep, me too.

Especially as the person I’m stealing from is myself. That’s how evil she is, er, I mean how much of a genius she is. Yes, she I can’t really report myself. And while me and myself occasionally gang up on I, none of us really win the encounter.

So how is my mother accomplishing this? It’s brilliantly nefarious. She asks. Yes, you read that right. She asks. Not for me to steal from my own home, she’s far more clever than that. First, we play the memory game.

“Do you still have that folding table?”

“Oh, no reason. I just think it would fit great in my spare bedroom. You see the table I have is too large and I have to keep moving it or taking it down. It’s cutting down on my painting time.”

“Um, okay.” I’m really a lamb to the slaughter. “I suppose you could borrow it while family is in town.”

“That’s wonderful. You can have the bigger one in exchange.”

Yep, I was reeled in and clubbed before I tried to breath on land. And the worse thing was, the table that was exchanged migrated to her porch, where it was pressed into another service and well, two years later it’s still there and my folding table is in her spare bedroom.

Lately, she’s been working on stealing my dining room chairs. Family was coming for Christmas and she needed extra chairs. I happen to have 2 folding chairs. Three years on and I still only have visitation, not custody of those chairs. This past Thanksgiving, she needed one of my wooden chairs (for family, you know). I brought it. I had 10.  Then one died in a horrible climbing accident and another made the migration west to her house. Now I know where 6 are, with another 2 in her house. I try to take them home with me. She doesn’t want them crammed in my car as it would reduce my visibility.

My mother is always thinking of me.

Or my belongings. Although, she values us both. I think. 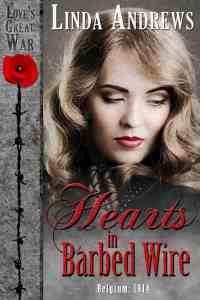 In my latest release, the heroine promises her father she would enter a convent to gain his forgiveness.

Lieutenant Lucien Duplan is wounded and trapped behind German lines. To reach the Dutch border and freedom, he needs Madeline Thevenet—a woman who eases his pain but is destined to become a nun.

Aiding the man responsible for her parents’ death is the last thing Madeline wants to do. But to get her young brother safely to Holland, she will do anything to avoid being caught by the Germans and tried for treason, including putting her heart on the line.

Madeline and Luc must stay one step ahead of the enemy. But the war around them is nothing compared with the battle raging inside. For honor and duty demand one action; and love requires another.

What is the oddest thing a family member or close friend has convinced you to do?

Make sure to leave a comment as Linda will be giving away a free ebook to one commenter.