It was the spring of 1992 when I made the move. I left all of the comforts of New York City, where I had been studying acting at NYU, to make the transition to Los Angeles to seek my fortune in the City of Angels.  I have had – and still do – the “Hollywood Dream” for as long as I can remember, and making the journey west seemed to be a natural transition for me.  I remember, as I was flying over the country munching on peanuts, I realized something : this was no longer a dream, but hard and cold reality. Like millions of others before and after me, I was arriving in Tinseltown with stars in my eyes, dreams of fame, fortune, and Gianni Versace on the red carpet.  My stomach tightened up into a little fist right there on that United Airlines flight into LAX. I was actually going for my dream! Did the dream turn into a nightmare at times? Oh, certainly…. Los Angeles is not a town for the faint of heart, nor for people who hate driving.

When I first arrived in LA, I spent the first few weeks of my new life living with relatives in Beverly Hills. It was a fantasy life for a while, but then I had to branch out on my own. I found a little apartment at the foot of the Hollywood Hills, found myself an agent, and started going out on auditions. My very first audition in LA was for “Beverly Hills 90210” – ironic since there is where I was staying when I first moved here. I was excited because I loved the show, but alas, I did not get the part. From that point on, my life became a series of lessons – no, not acting lessons – life lessons. The kind of hard life lessons one learns when they venture away from home to pursue a dream, and try to survive. I realized very quickly that there are lots of sickos out there, waiting and praying on the vulnerable.

My latest novel, “City of Toys”, chronicles the lives of four different women who seek their fortune in Hollywood. I chose the title – well, because “Valley of the Dolls” was taken- but also, one does seem to feel like a doll, a plastic toy. When a lifelong dream consumes your soul, it is like your body goes on auto pilot, and the dream takes over your life and your actions. The women in my story hunger for fame at any cost, and the personal demons that drive them seem to haunt their every move. It is an easy city to lose your soul in, and at times I felt like a lost soul trying to find my way.  I learned some hard life lessons, to be strong in who you are, not to let other’s negativity get the best of you, and keep your sense of humor. Those kinds of things will help you survive in Hollywood, and in life, too!

Oh, and friend me on Facebook if you get the chance. 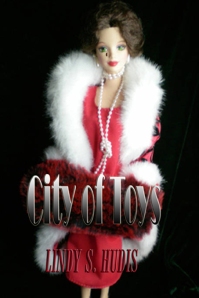 Four beautiful women seek fame and fortune in Hollywood, the City of Toys, where actresses are like dolls, playing pretend on the big screen.

Kim: a “nice Jewish girl” with a painful childhood.

Guyla: a “serious actress” with a debilitating, stress-induced illness.

Marlo, Rhonda, Kim, and Guyla, become friends living in the same apartment complex, in the city where dreams and disasters go hand-in-hand. They come to rely on each other as they deal with sexual come-ons, crazed stalkers, jealous starlets and the constant pressure of trying to make it in showbiz. But when the pressure gets too much, will their friendship save them or will the City of Toys break them?

Lindy S. Hudis is a graduate of New York University’s Tisch School of the Arts, where she studied drama. She is a former actress, having appeared on such television shows as “Sunset Beach” and “Married with Children”. Her romantic murder mystery, Weekends, is currently available from Lachesis Publishing. She is also a filmmaker, her independent short film “The Lesson”, which she wrote, produced and directed, screened at the Seattle Underground Film Festival. She is co-owner of an independent production company called Impact Motion Pictures. She and her husband Steve, a Hollywood stuntman, have just completed the screenplay adaptation of Charmaine Hammond’s best selling book, “On Toby’s Terms.”  She lives in California with her family.