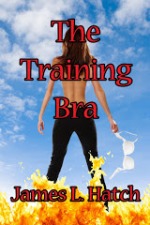 Interviewer: Today we welcome Miss Havana, the lead character in The Substitute; Oh, Heavens, Miss Havana!, The Training Bra and The Trophy Wife. It’s good to have you here Miss Havana.

MH: I’m sure it is. By the way, who dyes your roots? They look great. I can hardly see any grey at all.

Interviewer: Ah … this interview is about you, Miss Havana, not me. Tell me, do you get killed in your new novel like you do in all the others?

MH: You know, that’s a hard question to answer. I mean, my daughter, Lilith, did overdose me on chloroform … that came pretty close … except the Most High weighed in and saved me. I’m not sure if I’ll be killed off permanently during the edit cycle or not. Those editors can be brutal.

Interviewer: I see you have dyed your hair too. Aren’t you normally blonde?

MH: That’s a viscous rumor. I’m only blonde when my host is blonde. That’s the thing about spirits—it’s hard to wrap your hands around something that isn’t really there. As The Trophy Wife, my host is Cuban. She’s a knockout with beautiful ebony hair. I try to do her justice … you know, by not acting too blonde.

Interviewer: So you are The Trophy Wife. Based on your other books, I’m a little surprised by that. Whose trophy are you, anyway?

MH: Well, what a lame question. God’s of course. We have a child together too, but that wasn’t very satisfying, considering the whole Immaculate Conception thing and all. It’s not just me. He said Mary wasn’t all that satisfied either.

Interviewer: You had a child with God? How is that possible? Wasn’t your last mate Lucifer? Isn’t Lilith your daughter with him?

MH: I see … you are not a believer. Anything is possible with God.

MH: Now see here, a lesser person might take that line of questioning personally, but the answer to your question is simple. He likes me. I’m pretty.

Interviewer: You’re pretty. That’s it? That seems a little shallow.

MH: Well, there are those other things. I did stop the rise of the Antichrist in The Substitute … and I became the Angel of Death in Oh, Heavens, Miss Havana! … and I prevented the apocalypse in The Training Bra when I broke up the horsemen. Those guys and girl don’t like each other anyway. They don’t like Lucifer either. Come to think of it, they didn’t like me much, if you can believe it. Although interfering with those events really got under Lucifer’s skin, God apparently appreciated my effort, even if most everything was an accident.

Interviewer: So God … does He love you?

MH (batting her hand across her face like chasing away a gnat): Oh, you are primitive, aren’t you? Of course He loves me—He loves everyone. The problem really wasn’t God’s love, but the issues associated with showing up pregnant. My sterile husband became suspicious right away.

Interviewer (flipping pages of notes): Oh, that had to be bad. It says here you are married to Samuel Jackson. The actor?

MH (looking disgusted): That Samuel Jackson is black; my husband is a white fireman. No one gets them confused … except possibly you. Yes, I would say the experience of showing up pregnant could have gone better. I suspect Joseph had the same issues, but hey, that was a long time ago.

Interviewer: Can you tell us a little about your new baby?

MH: You mean, Angel. Oh, she was a very sweet girl … while she lived. I have to talk to the author about that. He keeps killing off people I get close to. That just doesn’t seem right.

Interviewer: He killed your child? What kind of rat would do such a thing?

MH (nodding agreement): You’re right. Nailing her to the side of a barn seemed a little extreme, even to me. On the up side, he did replace her with two little girls Jackson and I adopted, fraternal twins we named Lily and Angel. They are the stars of the next novel, Sisters.

Interviewer: Will your children continue the battle between good and evil like you have … since the beginning of time?

MH: You must mean my brief stint as Eve. Yes, those were good times, but that’s the topic of another novel still being formulated. I think it might be called, In the Beginning.

Interviewer: We’re just about out of time, Miss Havana. Thank you for stopping by today.

MH: My pleasure. And, for those who wish to stay just a bit longer, I’ve provided an excerpt below from The Trophy Wife. The scene takes place when my daughter, Lilith, who inhabits the body of Lily, and her rotten boyfriend, Fred, Jr., who is haunted by Lucifer’s right-hand shadow creature, Waldo, attack me with caramel sauce and feathers. Of course, I strike back later, and the cycle of attacks just get worse and worse until someone dies. Isn’t that how it always works?

They laid in wait for almost forty-five minutes before they saw Miss Havana walking toward the garbage bin with her evening trash. They had pre-positioned their supplies, and the moment Miss Havana stepped into the dumpster enclosure with her trash, Fred Jr. sprinted to the gate and locked it from the outside with the chain and padlock. Miss Havana heard the chain rattle and turned to look. “Hello. Is someone there?”

Snickering came from outside the fence, and then the deluge began. Two focused beams of caramel sauce rained down on her from out of nowhere. She screeched and tried to cover her hair with her hands, but to no avail. The sauce kept coming … and coming … and coming. And when the downpour stopped, it rained feathers.

She could hear receding laughter, a man and a woman, before she heard screeching tires … and then nothing but silence. She spit feathers from her mouth and grumbled low, “It had to be Lily. That bitch!”

When she tried to leave she realized she was locked in. She had left her cell phone in the apartment, and began to shake from both anger and cold. The stench of rotting garbage made her want to gag. She slipped to a sitting position in one corner and looked into the dark celestial dome toward the stars. “Oh, God, please help me. This girl is driving me crazy. Remember the angel I asked for? I could sure use that now. Are you out there?”

She bowed her head as tears slipped down her cheeks. At first her sobs came softly, and then they grew louder. She cried like she had never cried in her entire life. Her tears flowed like an open hydrant. She felt alone, despondent and helpless, and began thinking of Sister Elizabeth’s words, “You can always work at Saint Mark’s.”

She took a deep breath. Yes, she did have options. Maybe she should consider them.

Just then she heard Jackson’s voice. “Miss Havana? Are you in there? Hello?”

“Jackson? It’s me,” she yelled. “I’m locked inside this damn fence. You don’t have any bolt cutters with you, do you?”

She heard a loud thump followed by some scraping sounds, and then Jackson’s smiling face appeared at the top of the fence. “Evening, Ma’am. Can I be of assistance?”

She looked up without standing. “That’s a fool question, Jackson. Get me out of here.”

She heard the chain rattle again, followed by, “Hum, it’s chained up pretty tight. I’ve got to go to my car.” She heard him snicker before saying, “Stay where you are. Don’t leave.”

She put her head in her hands. “Oh, my God. I need rescuing, not a comedian.”

In a few minutes Jackson returned. She heard the high-pitched whine of a battery-operated power tool, and could see sparks flying through a small slit in the fence. It looked like Jackson was playing with a Fourth of July sparkler out there. In another few moments the equipment went silent and Jackson popped open the gate. “Hello. I heard someone in here needed the fire department. Is that right?”

With her head held low, Miss Havana slinked out of the enclosure. Feathers covered her from head to foot. Jackson shook his head. “My goodness, Ma’am, looks like you plum been run outta town.”

“Very funny,” she said dryly. “I don’t know whether to hug you or slap you.”

The hot shower never felt better. Miss Havana scrubbed the feathers and caramel sauce while Jackson kept reaching in to remove the feathers clogging the drain. It was a two-person operation he enjoyed, especially the view from where he sat. He thought it best to wait until she completely cleaned herself before questioning her. She didn’t seem too receptive at the moment.

About thirty minutes later she turned off the water and glanced down at Jackson. “Towel, please.”

He handed one in. “Ah, heck. Looks like the show is over.”

She asked the question foremost on her mind when she stepped out. “Why are you here, Jackson? I thought you were on duty tonight.”

He grinned. “Terry owed me a favor. I asked him to fill in for me so I could ask you out for dinner. Are you up for that … or do you just want to ‘stick’ with what you’re doing?”

He thought the comment was clever, but she just glared before her face softened. “More than anything, I want to be held. Are you up for that?”

“Sure, but I’ll owe Terry big time if I’m not back in two hours.”

“Terry’s a big boy,” she said as she let her towel drop and began dragging him toward her bedroom. “He can handle it.”

Although his Bachelors, Masters, and Ph.D. are in Chemistry and Meteorology, James worked as a scientist and system/software engineer before retiring a third time, then turned to writing. Extensive travel, from Thule, Greenland to Australia’s Great Barrier reef – and to dozens of countries in between – provide the real-life experiences he incorporates into everything he writes.

James enjoys boating, kayaking, skiing, traveling, hiking, tending nine grandchildren (no more than two at a time), and ballroom dancing, but his first love is writing. He has completed seven novels and one short story, and intends to continue writing in the Sci-Fi and Paranormal Comedy genres. He has contracts with xoxopublishing.com, Solstice Publishing and Eternal Press.