I absolutely love spring. It is without a doubt my favorite time of the year, next to fall. Maybe it’s because the world was blessed with my heralded arrival in April, lol. Maybe because spring represents renewal and rebirth. Maybe because it makes me think of the recharging of energy. A time where all of our thoughts tend to lead more frequently towards love, romance….and of course sex.

Some interesting facts to consider:

Did you know that conception historically (1778-1940) happen in late spring, early summer? Or that most babies in Northern countries in fact, are born in the spring? Fascinating. But enough of the history lesson, eh?

Let’s get to the good shit.

So of COURSE when I think of springtime and sex, I HAVE to mention my favorite sex scenes to read. *grins cheerfully*

I love ménages scenes. They will forever remain some of my favorites. I have always been a greedy, selfish kind of bitch, never wanting to have to choose between two yummy, scrumdiddlyumptious men, but wanting all focus on me. The ultimate head trip, eh?

In fact, my philosophy is you can never have too many men. There is always a reason for more men in the bedroom, lol. If you’re otherwise occupied, they can at least be a feast on the eyes as they please each other, both for your enjoyment and for theirs. (Yours most of all though. After all, it’s your fantasy, right? *grins*)

I also love the idea of being on display for someone else. There’s something so fantastic, titillating, forbidden, not to mention arrogant, about performing knowing someone else is watching, getting off while you do the same. It’s a heady, hedonistic, thoroughly wanton feeling, knowing you have that kind of power. Definitely a complete rush.

In my novella give & receive, this is one of my favorite scenes with Ty, Danny and Lena. What I love most of all is there is no actual fucking. There is so much tension in the air, you can almost taste the promise of what’s to come, and trust when I say, if you stay tuned for book II, it does deliver the just desserts.

I won’t say what parts of this are semi-autobiographical and what parts still remain fantasy…because of course, I don’t like to kiss and tell, lol. *winks*

Tonight…just for tonight, she would play Ty’s game. No rules…no boundaries. Just pleasure. The fact that Ty was the one giving it to her was something she would obsess about later. And probably tell herself a million times over just how stupid she was for giving in.

She wasn’t as obtuse as he thought she was either. She was more than aware of the sweltering chemistry, blazing between them for years. He had a magnetism hard to resist, even for her. She knew, if given half an opportunity, he’d fuck her senseless, and she would like it.

Senseless fucking, was reserved for groupies and whores who had nothing to lose because they had lost their pride long ago. Which was precisely the reason she never gave in. Until now, of course. Hypocrite.

It would be much too easy to fall into that pattern with him and she wasn’t looking to fuck up what they had over something physical, no matter how tempting. She knew she would be wise to remember that.

All that, however, was before this moment. This time. This night.

Now everything was different.

And yet, here they all were.

In the back of her mind, she noted wife of the year Elizabeth and Remy had disappeared, had been gone for quite a while. She knew that bitch was fucking him, she just knew it. God. What a cunt. She almost felt bad for Danny, except he knew who she was when he married her.

As for Remy the bodyguard, he was pretty much piece of shit material. She could never understand why they hired him in the first place. He was lecherous, leering, uncouth, uneducated, unattractive…un a bunch of things.

Ty’s mouth slid down her neck and she was jolted back to reality. As she pressed further back into him, the currently stiffening hardness of his obviously impressive cock jutted against her backside. She arched back and became lost in his touch as he lightly bit down on her shoulder, thinking of a hundred different things she wanted him to do to her.

Even more she wanted to do to him. It was all in her head, wasn’t it? Her fantasy. So why couldn’t she enjoy? She could be anything she wanted. She was the star of the show. She loved the attention, loved the adulation. She wanted the pleasure.

She grabbed Ty’s glass Dion had refilled and drank from it, using her tongue to lick across exact area she had seen him drink from. Danny gaze was hooded as he watched her drag her tongue over the top once more before taking another drink. When her tongue flicked out to lick her lips, his hands dug into his thigh and she watched his knuckles become stretched and tight.

“I haven’t thought about performing in a long time.” She said, to no one in particular. “I used to enjoy it.”

“Oh yeah?” Ty’s hands were caressing either side of her legs, his hands inching further and further up her thighs. Her skirt started to ride up a little, exposing more of her damp, sweat-slickened skin. Danny’s throat went dry as he continued to look, unable to tear his eyes away. She moved over Ty’s lap ever so slightly and Ty’s guttural, low groan vibrated against her skin.

She was the hottest thing Danny had ever seen.

“What did you like most?” Ty’s voice was raspy, heated. He couldn’t believe he was still coherent at this point, let alone form complete sentences. All he could think of was burying his face between her thighs and savoring and tasting the sweet nectar of her pussy. He wanted to lap up every bit of scorching wetness he was feeling through the fabric of his pants and wasn’t too sure how much longer he could play this game.

Thank god she designed the place with all of this in mind. It held a naturally dark, fantasy element, appealing to those who wanted to…indulge a little further, yet still maintain their privacy. Simply put, you didn’t see someone else doing anything unless they wanted to be seen.

Not that she ever expected to be the main attraction.

“I love the way it made me feel. In control. Powerful. It was like…” She was breathless now and trailed off, becoming lost in Danny’s eyes again. They bored into her soul with a fiery intensity that was both intimidating and scary. And the sensation of feeling Ty beneath her while Danny watched them was driving her crazy insane.

“Like what, baby…tell me what it was like.” Ty pressed her hips down on top of him and began to move slightly, sliding his hips in a rocking motion.

“It was like…riding a dick. Setting the pace. Controlling the flow. Oh god….Ty…what in hell are you doing to me?”

Ty slid his hands under her ass and unzipped his jeans, far enough so that beautiful, thick cock sprang free. He hitched up her skirt from the back so that she wasn’t exposed in the front and pulled her back down, almost all in one movement.

They were now flesh to flesh, skin to skin, with nothing separating them now but free will. He was, but mere inches from being fully sheathed inside of her.

Danny made a strangled noise, deep within his throat and it was all he could do not to reach out and touch her. Just once.

But he didn’t dare. He knew if he did he wouldn’t be able to help himself from ripping her off of Ty, pinning her down and fucking her himself.

“What am I doing?” Ty murmured, repeating her question, his lips against bare back as the strap of the skimpy top she wore was finally shoved aside. His lips blazed a path down her spine as he paused to lick the salty taste of her skin to his mouth.

“I’m making it good for you, sweetheart.” His hands finally slid under her skirt from behind and managed to part her thighs.

“Tell me if you want me to. I want to make it so good for you, baby…but you have to tell me. What do you want, Lena? Do you want me to touch you…like this?” Ty’s fingers lightly brushed over her clit and she gave a moan, from deep in her throat as she began to throb within her lower belly.

As Lena arched her back and closed her eyes, Ty caught Danny’s eyes again and arched an eyebrow, silently asking if he had been tortured enough.

Danny’s expression, the agonizing twist to his mouth, the flash of his strange, silvery grey eyes, spoke volumes. He couldn’t stop now. Part of him was so resentful and angry it wasn’t him beneath her. At first. But he managed to choke down the rage welling up inside his chest, because if he was beneath her, he couldn’t be there.

Right in front of her. Witnessing her pleasure firsthand. It was that part of him that wouldn’t trade with Ty for anything in the world. Ty could physically feel her, yes. Danny could see her, her face, her body….her soul.

He was beyond the jealousy now. Now, he just wanted to connect with her, in any way possible. Force her to see him, acknowledge that what was between them was real and not some fucked up figment of his imagination.

Ty couldn’t lie to himself, either. This was no longer just about proving a point to Danny.

It was about doing what he had wanted to do for years.

Stepping up, to try and claim a piece of her heart.

That didn’t already belong to Danny.

Hope you enjoyed the blurb!  Please feel free to leave a comment. One lucky commenter will win a copy of give & receive. Also, one lucky commentator can win the grand prize package from XOXO Publishing. Don’t forget that there are many stops on this hop so increase your chances of winning more prizes by making as many stops as you can. Please make sure to leave your email address in your comment so we can get in touch with you! 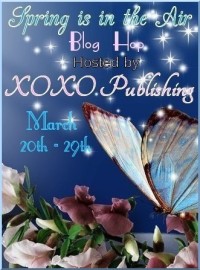