On December 28th, Tina is set to release Losing Control, Book Two in her Appointment for Pleasure series.  Here’s the blurb and an excerpt to give you a taste of the story!

Did you ever want someone you absolutely shouldn’t have? Did your desire grow to the point where you simply couldn’t help yourself any longer? Your heart and soul urged you to go for it…to see where passion might take you. 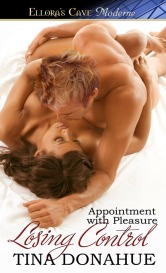 Catherine’s a high-priced call girl. Tim is from old wealth. They shouldn’t have met the way they did and because of it, Catherine doesn’t tell Tim that she works for an escort agency.

She aches to be with him, not as a client, but as a woman who’s drawn to him as she’s never been with another man. Tim calls to something deep within Catherine, a part of her she hasn’t indulged because love isn’t something she believes she can have.

Their story begins at a holiday party in a DC mansion. Tim doesn’t know Catherine’s been watching him, yearning to be close. She knows who he is. To him, she’s a stranger, though not for long.

When it comes to passion, there are no rules…

She wasn’t supposed to hunger for him. Tim Bellamy was off-limits to Catherine, a high-priced call girl with an uneasy past. Indulging in his raw desire shouldn’t have happened, especially at a District party attended by the nation’s elite. Tim doesn’t know she works for the agency. If he did…  That’s not something Catherine wants to confess. Drowning in his strength and heat, aching to see him again, she keeps her secret.

From old wealth, Tim has never met anyone quite like Catherine. Exotic, elegant, earthy, she’s the best of all worlds. Their evenings are sensual delights where voyeurism, bondage and a growing bond satisfy carnal needs and stir something deep within…until he stumbles upon the truth.

She really should leave. “Catherine,” she murmured, telling him her name.

Tim’s smile said he approved. However, he also arched one eyebrow, a darker blond than his hair, the gesture indicating he wanted her last name too.

Catherine suspected he wouldn’t settle for anything less. He was a man used to being in charge, one she wanted to take down, to weaken with her kisses and caress. She longed to drive her fingers through his hair, mussing it, then coax his cock inside her cunt, driving him over the edge, making him defenseless within her embrace, proving her power over him.

He grinned like a man who’d just won a prize, rather than having heard a partial truth.

Years ago, she’d legally changed her given name to one that was more elegant and preferred. With her agency fees and new identity, she’d enrolled in Georgetown, graduating with honors exactly as she’d told him. She’d gain her Masters next and get a real life, a home, using it to care for the one person who’d offered her love and safety during her bleak childhood when she’d had no one else.

None of her clients knew that, of course. Nor were they privy to her surname and educational accomplishments. No matter how many times they booked her, she was still merely Catherine to them.

A precaution she should have maintained with Tim. Already she’d told him too much, especially his preference in liquor, which she’d read in his dossier. How could she have been so dumb? Somehow, the words had just spilled out of her mouth without her realizing it.

Tim finished a sip of his drink. He was close enough for her to smell scotch on his breath, along with his fragrance, masculine and woodsy. His file claimed he always wore Clive Christian’s No. 1, priced at over eight hundred dollars for less than two ounces.

As far as Catherine was concerned, it was money well spent. She suppressed a shiver of delight.

<He leaned into her, his mouth near her ear and murmured, “What discipline are you studying?”

Catherine turned her face to his, pleased he was interested enough to ask, delighted he was so near. A few more inches and their lips would touch. His shadow of a beard suggested he hadn’t had time to shave before coming here or hadn’t cared enough about the event to do so. She was damned grateful for that. His bristly cheeks would be a wonderful contrast to his soft, warm lips.

“Sociology.” She paused to breathe, surprised she kept forgetting to do so. “Social inequality to be exact.”

Bleeding heart territory, she knew, and work that would never make her rich. Not that Catherine cared. However, she did wonder what Tim thought.

He continued to regard her with what appeared to be fascination, as though he couldn’t get enough of her. Unless she was simply hoping for that.

“Good for you,” he murmured, running his hand up her arm.

Her legs went watery at his appraisal and touch.

To celebrate the upcoming release – December 28 – of Losing Control, Tina is offering a contest.  One commenter (chosen at random) will have a chance to win one of my backlist ebooks from this list: